While attending a Writers’ Forum in Picton – a picturesque Port and marina in New Zealand, I was able to share experiences with a number of self-published authors.

Above: (Left) Me – Heather Sylvawood – absorbed in Walking on Ice by Emma Stevens; (right) Mike Ponder’s ”could-be-true” conspiracy novel about the Royal Family

Without exception the writers who attended the Picton Forum related difficulties over being taken seriously as writers of quality books. They all acknowledged that at the beginning of the Indie (Self) Publishing emergence there were books published that really required hard editing to bring them up to the standard of print-based books, but now, unfortunately, quality books are reaching the online shelves without a whisper of recognition.

What does it take to prove quality in writing?

And if you prove it – what then?

How can New Zealand author’s become recognised in their own country against the well-resourced distribution houses of America?

There are some small publishers and printers in New Zealand who are attempting to right the balance, yet they too come up against the confusion over the terms ‘Vanity Publishing’ and ‘Self-publishing’. As Dave MacManus from The Copy Press, printing and publishing house, defined it: vanity publishing is done when the author wants only a printed copy of their material for limited circulation among family and friends; self-publishing is for people who have written a book for general distribution. Put like that, why has the term ‘vanity publishing’ earned such a bad rap?

The Legacy of Vanity Publishing

The quality of a self-published book is imperative if the publication is to be taken seriously out in the reading world. Unfortunately self-publishing is still tainted by the lack of editing of vanity press editions and the editing by those who climbed fortuitously on the indie-publishing scene when still in its infancy.

The indie/self and digital publishing divide

Another area of confusion about the quality of the writing in self-published books – as opposed to traditional print published books – is that self-published books are not edited before they hit the … shelves/lists. That can be a legitimate complaint. With publishing on Amazon as a Kindle eBook so simple, authors, who needed to learn better, put their drafts out for all the world to see. And some of the writing is cringe-worthy with poor grammar, spelling mistakes and general clumsy construction making the book a hard read.

Prior to publication, however, many authors  of self-published books and eBooks spend hundreds of dollars employing one or more editors to hone their story to a reputable standard. The reality is that good authors do not want to be shamed by a less than perfect product.

Not every printed book you might choose to order will necessarily have been edited and printed by a traditional publisher. Many of the soft copy books you can buy online will have been self-published. They may have been printed by a print-on-demand (POD) publisher such as CreateSpace (Amazon’s print book publisher) or Lightening Source.  POD is when a title is printed and bound, one book at a time, in response to your individual order.

Alternatively, an author might have chosen to have their book printed in a small run by a printer like The Copy Press mentioned above, and may then advertise it through online bookshops. That same author could either engage a distributor to get their title into bookshops, or trudge the country hawking their book. Okay, it’s not quite as bad as it sounds, but some writers in our Picton forum described experiences very close.

Self-promotion is an awkward companion for many writers

Coming to terms with the need for self-promotion brings blushes to faces of many authors. Writing is what they do – not marketing.  The two activities of writing and promotion are diametrically opposed – one is a solitary, introspective activity; the other forces you to engage with others (many others) and put yourself out in the world, vulnerable to criticism and judgement.

Getting out and promoting your book is hard work and you have to get over your personal fear of rejection when someone (and this is inevitable) rejects your request to buy, sell-on-behalf, stock or otherwise help you to earn some recompense for your months of hard work. Ironically, our tax department views most writers’ endeavours as a ‘hobby’ because many of us profit by only a few cents per book.

Self-promotion, though, is the only way we are going to get noticed in the over-crowded digital world. In the world of digital publishing (eBooks and POD) we really have to use the scatter-gun approach. We need to Tweet and Link-in, advertise on Facebook and our websites, blog and plain beg our friends and relatives to spread the word.

Now to introduce you to a few of the writers I met over the weekend. You’ll see what a varied bunch we are. 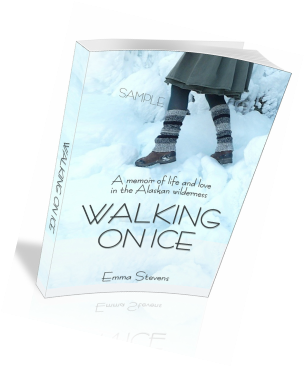 1. Emma Stevens has learned by trial and error how self-promotion benefits an author. She happily takes on talks to U3A, Probus Clubs, libraries and the like, and was rewarded recently by being interviewed by the NZ Woman’s Weekly. It’s all good publicity and you get to sell copies of your book after the talk, she explained.

Her book Walking on Ice has captured the imagination of many readers in its autobiographical description of her online romance with a teacher from Alaska and their eventual return to the isolation of a school there. The story does have all the great elements for a gripping story: the apparently insurmountable odds for a romance to flourish and the heroine and hero’s sad separation, and finally their reunion in inhospitable environs of Alaska.

2. Mike Ponder is both artist and writer. His book The Windsor Conspiracy is based on popular belief/gossip, but little known suspicion, about what really moved the House of Windsor after the war years. Is Prince Charles really a Windsor? Was the Queen Mother an evil manipulator? This fast-paced thriller is based on a conspiracy behind Britain’s Royal Family.

Mike uses snatches of history, real and conjectured, to weave a mystery around what really did happy under the Queen Mother’s ‘reign’.  Watch out for the next story and review your review your understanding of who is the power behind the throne and who might be the ‘heir apparent’.

3. Wendy Scott – Surrounded by the wild West Coast is it any wonder that Wendy’s imagination gives rise to stories of magic and witches? She says of her life: “When my partner, son (5 months), dog and I moved back to NZ we lived in a house truck for 3 years while our off-the-grid house was planned and built. During this period I wrote on a solar powered laptop and completed many correspondence courses from the AWA.”

4. Sue (Suzanne) Clark lives in Collingwood, Golden Bay and began writing after retiring from teaching. Sue enjoys researching her subjects and building a what-might-have-happened novel from what she uncovers. Both Awhina’s People, a pre-european story about Maori warring between tribes, and His Father’s Will, a story of one of her own forebears have been based on extensive research and interviews with those who could shed light on early events.  Mrs Lacy, however, draws on her knowledge of living in a small community, like the environs of Golden Bay.

5. Tony Sandall – horse trainer extraordinaire has written a non-fiction, how-to book in which he shares the learning of a life time,

“My method teaches you to work with your horse through the early kindergarten months so he becomes quiet and obedient in all circumstances, ready to move on to whatever discipline you ask of him,” says Tony.

It’s one of those must have books for serious riders trying to correct a bad habit in their mount, and those who are schooling a young horse. “Essentially, the method involves the use of a specially designed strap or rope to restrict the movements of the horse during the early teaching process.”

6. Heather Sylvawood – (And this is me unashamedly promoting myself!) I call myself an emerging Amazon writer and publish most of my work as Kindle eBooks. I started with non-fiction, moved into children’s stories written to be read by adults, short stories for adults and finally I have one published novel – More Than I could Bear – A Lesbian Affair. The story, set in the 1970s, follows Laura and Anna who are both the main carers for their autistic daughters. The story relates the many ways families cope with the effect of lost hope, stress and depression caused when a family member has an intellectual disability. Its shocking climax illustrates the tragedy of women left unsupported in an age when disability was a hidden phenomena.

Sometimes I question why most authors are so under-valued. They spend so long writing their books – literally months a few hours every day – then they’re paid small amounts for each book and finally they’re taxed. If you reach the thousands of copies purchased each day, then the endeavour might be worth it, but most of us authors are overjoyed when purchases number a handful a week.

I have just gone through the agony of an online ‘Tax Interview’ in order to print some of my books in softcopy through CreateSpace.

Taxes due no matter how little

Now, don’t get me wrong, I LOVE the digital opportunity for writers provided by Amazon and digital publishers like Kobo and Issuu. They gave me the confidence to take my writing to the next level. But governments have now realised there is a stream … well maybe a trickle … of revenue they were not tapping into. Consequently we writers have to register as foreigners if we’re earning money from the US through Amazon.

The process has taken me a couple of hours – not because it was particularly difficult but because the terms are described in legal-speak and not given an explanation in common english. I’m sure those for whom english in a not a first language must be even more perplexed.

Finally, after searching on several search terms I finally came across thirty-something blogger Catherine Howard’s  informative post that answered the one question I couldn’t find an answer for anywhere else, even after reading Amazon’s CreateSpace Tax Information Guide.

Catherine’s Blog on Completing Your Tax Interviews is a godsend in that she has taken the time to capture the full process in images. I would highly recommend that you have this open on your second screen, or even (said in muted tones with a touch of apology for my old-fashioned view) printed out.

Thank-you Catherine. I’m finally ready to start researching how to put up my new title on CreateSpace.